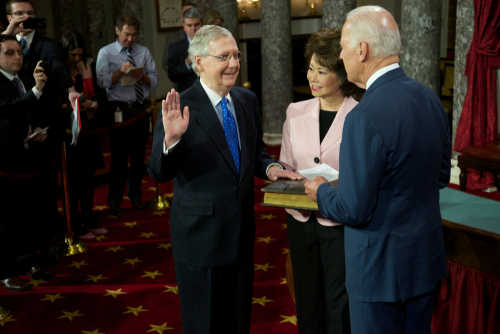 While appearing on “CNN This Morning” last Thursday, Chao was asked by co-host Kaitlan Collins to respond to Trump’s latest Truth Social rampage last Wednesday in which he referred to his former Transportation Secretary as Mitch McConnell’s China loving wife, Coco Chow.”

Chao told Collins that it would be “very helpful” if the media doesn’t repeat Trump’s nasty “Coco Chow” nickname. She said if Trump had used a racist slur like the n-word, the news media wouldn’t repeat it. But the media has no problem “continuously” repeating Trump’s “racist taunt” against her.

Chao, who was born in Taiwan and came to the United States as a child, said the former president uses the slur “to get a rise out of us.”

Kaitlan Collins pointed out that she “made a point of not saying” the slur when she asked Chao to respond to Trump’s latest attack on Truth Social.

Trump has referred to Eileen Chao by that slur several times in his Truth Social rants against McConnell.

He first debuted the insult last fall in an October Truth Social post where he accused Mitch McConnell of having a “DEATH WISH.” Trump claimed that McConnell should get help and advice “from his China loving wife, Coco Chow!”

The day after Christmas, Trump again used the slur while attacking McConnell for supporting the $1.7 trillion omnibus spending bill. Trump claimed McConnell supported the bill because it included “a massive giveaway & capitulation to CHINA, making Coco Chow so happy!”

Back in August, before he landed on his go-to racist nickname for his former Transportation Secretary, Trump lashed out at Chao while attacking her husband, calling her McConnell’s “crazy wife” who is getting “rich on China.”