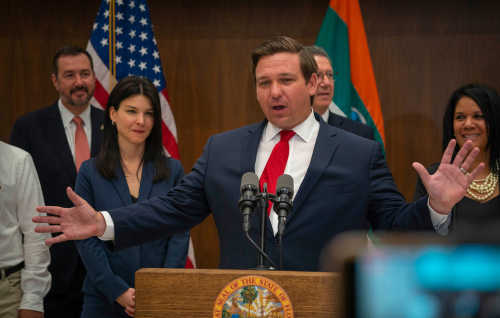 It’s a tactic Trump is using to try to build his case as the undisputed best choice for president among Republicans as DeSantis has frequently been mentioned as one of his biggest potential primary challengers.

Now that DeSantis has officially locked down re-election for governor in Florida, he’s ready to respond to those comments from Trump.

During a press conference on Tuesday, a reported asked DeSantis whether he had any comments about Trump announcing that he was running for president, or any response to Trump’s “less-than-flattering comments” that he made about him.

“One of the things I’ve learned in this job is when you’re leading, when you’re getting things done, yeah, you take in incoming fire. That’s just the nature of it. I roll out of bed in the morning, I’ve got corporate media outlets that have a spasm just the fact that I’m getting up in the morning, and it’s constantly attacking, and this is just what’s happened.”

DeSantis continued that he doesn’t think that any other governor has received as many attacks as he has over the first four years he served as Florida governor, especially by the corporate media. But, he said:

“What you learn is, all that’s just noise and really what matters is, are you leading, are you getting in front of issues, are you delivering results for people and are you standing up to folks. And, if you do that, then none of that stuff matters, and that’s what we’ve done.

“We’ve focused on results and leadership, and at the end of the day, I would just tell people to check out the scoreboard from last Tuesday night.”

That last statement could be viewed as a slight attack on Trump. During the midterm elections last Tuesday, DeSantis trounced his Democratic challenger by 20 points, on a night when many Republican candidates for federal office — particularly many of those who Trump backed — suffered surprise defeats.

Many political pundits have said that the expected Republican red wave didn’t happen during this election cycle in large part because voters are sick of Trump and ready to move on from him.

Yet, Trump keeps pressing on, and he’s not changing the way he campaigns. He set his sights on DeSantis as his biggest potential challenger within the GOP, and he started launching attacks on him a while ago as a result.

Trump has given him the nickname of “Ron DeSanctimonious” and has said that’s he’s only an “average governor” who came into popularity because Trump endorsed him.

“Ron came to me in desperate shape in 2017 — he was politically dead, losing in a landslide to a very good Agriculture Commissioner, Adam Putnam, who was loaded up with cash and great poll numbers. Ron had low approval, bad polls, and no money, but he said that I would Endorse him, he could win.”

While DeSantis hasn’t announced whether he will run for president in 2024 yet, many polls show that he has a solid lead over Trump in some of the most important early primary states.

One thing is for certain: If DeSantis does throw his hat in the ring, it’s going to be quite the primary fight within the GOP.